Include Customers in Company Volunteering

The brewery is in an old warehouse — a former car dealership — in downtown Athens, Georgia. Inside, customers gather at a bar and big wooden tables.

Every Wednesday, those tables host representatives of community organizations, from homeless shelters to a student enrichment program. They educate brewery patrons about their organizations’ work and involve interested customers in a volunteer activity: for example, making a blanket for the local homeless shelter or preparing lunch sacks for underprivileged children.

Brewery Creature Comforts has made customer involvement — these “Community Wednesdays” — a core part of its corporate social responsibility efforts. In engaging customers in this way, it’s a trailblazer.

Now, a case study of Creature Comforts’ initiative shows that customer volunteering has powerful benefits too, for the company, the participating customers, and the community. That’s the verdict from a recent study by professor Jessica Rodell and colleagues Tyler Sabey and Kristie Rogers.

While the impact is impressive, Creature Comforts staff emphasize that Community Wednesdays are just one expression of the brewery’s passion for supporting Athens, Georgia and its surrounding area. That passion drives brewery actions from strategic philanthropy to producing hand sanitizer during the COVID pandemic, said Matt Stevens, vice president of Strategic Impact for Creature Comforts. He oversees the brewery’s overall corporate social responsibility program, called “Get Comfortable.”

Rodell and colleagues studied Creature Comforts’ customer volunteering in 2017. They attended Community Wednesdays over five months and interviewed and surveyed participants during that initial time and two years later.

The researchers found rewards from customer volunteering for:

Rodell and Stevens offered these insights:

A caveat: May not be suited to all businesses.

Customer volunteer programs may not be suited to every enterprise. Rodell points to a few characteristics likely valuable for this approach: a business-to-consumer model, a physical presence, and a local image and connection.

“I moved away from Athens four times,” Stevens recalled. “I kept coming back.” The brewery founders share that “very sincere love of this community,” he said. Community Wednesdays, Get Comfortable, and other company initiatives allow the brewery, its employees, and its customers to give back to a place they’re proud to call home.

More about CSR at Creature Comforts.

When Helping Hurts: How to Alleviate Poverty Without Hurting the Poor . . . and Yourself. “If you’re not asking the right questions, consulting data, and inviting local leadership to the table, your philanthropic efforts may be ineffectual or even harmful.”

This Is Where You Belong: Finding Home Wherever You Are. “I call this Citizenship for Dummies. There is a psychological concept described as place attachment, an emotional bond between a person and a place. The more a person loves a community, typically the more civically engaged they become. This book describes 10 things anyone can do to become a better citizen.”

Interview with Blake Mycoskie (founder of Toms Shoes). Podcast: Building a StoryBrand. “It’s about when, how, and why brands might consider taking a social stance and what the consequences are.”

How Managers Can Cut Energy Use, Divert Waste, and Improve Company Decision-Making 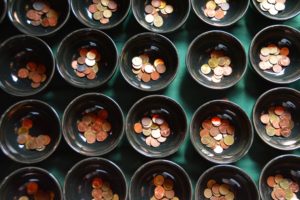 If your sustainability strategy is weak, don’t be surprised if your firm has to jump through hoops to secure funds. A strong strategy breaks down barriers.