It Does Not Take a Visionary to Change the World: Stumbling into Difference Making

Individuals can change the world. Dr. Sandra Waddock describes key steps to making a difference, drawing on her study of sustainability leaders.

How can we change the world? Dr. Sandra Waddock (Boston College) describes key steps to making a difference, drawing on her study of pivotal figures in the sustainability arena.

Some years ago, it occurred to me that the emerging systems and institutions that exist around sustainability and corporate responsibility did not just magically appear. They required the initiative, drive and desire for change on the part of one or more individuals — or, as Margaret Mead famously said, a small group of committed individuals. So, I decided to study the individuals who had started the institutions that now frame the discussion of corporate sustainability and responsibility.

These individuals or “difference makers” were pioneers around now well-known sustainability entities, including the UN Global Compact, the Global Reporting Initiative (GRI), Social Accountability International and numerous social investment institutions. Collectively, these institutions form a corporate responsibility infrastructure that encompasses generally accepted standards and principles, certification and monitoring organizations, social investment and standardized reporting, among others. Institutions within this infrastructure attempt to pressure companies, in different ways, into greater sustainability and responsibility.

What It Takes: Stumbling into Difference Making

The surprise — to me, anyway — in looking at the stories of the difference makers was that most of them were not charismatic leaders and visionaries with a clear long-term agenda. They had not “seen” the future, and gone ahead and deliberately established the institutions that would press for their desired changes. Instead, they frequently “stumbled” into their ultimate vision — or made sense of it after the fact.

They often took actions based on a personal desire to make a difference, and that moved forward initiatives that ultimately became the infrastructure we know today. These difference makers had a deep sense of purpose drawn from recognition of injustice, or a more general desire to make the world a better place.

Frequently, they started small initiatives, then drew others interested around them, and thus created more initiatives that had larger impact. For example, the founders of what was then called KLD Research and Analytics, the pioneering ESG assessment firm in the United States (now MSCI ESG), started with the 500 largest companies — and only over time expanded the scope, establishing related indices and other ways of moving the social investment field forward.

Key to success was what I call pragmatic vision, a willingness to take multiple small steps toward what they viewed as desirable system change, rather than attempting to implement a grand vision all at once. Most large and impactful initiatives began as small steps toward a sometimes vague larger goal. Small steps occur because the action is risky at first. Outsiders can be quite skeptical of these initial steps, so it also takes a bit of courage to push them forward.

These difference makers were not, at the start of their careers, movers and shakers or necessarily highly visible superstars (though some have become so). Certainly many of them did not come from privileged backgrounds (though some did). Instead, they are people who were willing to do hard and sometimes controversial work, sometimes out in front and sometimes behind the scenes.

The pragmatic side of being a difference maker also involves a willingness to take these initial steps, and then, in a sense, let go. Difference makers had to allow the institutions that had been created — a set of principles or standards, a new approach to investing called social investing, a naming and shaming approach to bad corporate practices — to have a life of their own. They had to allow the institutions to grow, change and evolve as they became more credible, gained legitimacy and acquired the resources needed to achieve larger-scale change.

Just consider, for example, how the UN Global Compact, originally written into a speech for then UN Secretary General Kofi Annan by difference makers John Ruggie and Georg Kell, has changed over its relatively short existence. From an initial 50 or so companies, it now involves thousands of companies and NGOs and many branches and spinoffs, including the Principles for Responsible Investment.

Serve as a Bridge

Many of the difference makers are boundary-spanners — working at the interstices or gaps between institutions to find leverage points for change. They both work with the system as it currently is and try to find places where change is possible.

Joan Bavaria, now deceased, was perhaps the consummate example. Not only was she a pioneer in social investing, founding the firm Trillium Asset Management (then Franklin Research and Development) simply because she found that her traditional investment clients wanted to put their money where their values were. Recognizing that social investment was a growing area, Bavaria also became founder and first president of the (US) Social Investment Forum. She then founded the business-led environmental organization Ceres, which later launched the Investor Network on Climate Risk. Ceres also backed the establishment of the GRI (founded by two other difference makers, Allen White and Bob Massie), and other learning networks of like-minded people.

At the outset of her career, however, Bavaria was simply a single mother trying to make ends meet to support her children — and driven by her desire to make the world a better place. Her capacity for — and love of— boundary spanning and networking, and willingness to let others step into the limelight was a key to her difference making. By moving through boundaries, from business to NGO to associations, Bavaria created powerful new synergies.

Looking at the difference makers’ social entrepreneurial efforts and institution building outcomes shows that it does not take a visionary to change the world.

What it takes is a willingness to risk action that moves a system or organization in the desired direction. And then take more actions to continue progress when it starts to be made. And bring people together who think along the same lines and are also willing to take the risk to make small changes. And not be threatened by others’ successes but rather celebrate them, encourage them and network with them to broaden impact.

Viewed from this perspective, we can all be social entrepreneurs — difference makers— in our own ways and from whatever perch we are sitting on.

Dr. Sandra Waddock is the Galligan Chair of Strategy, Carroll School Scholar of Corporate Responsibility, and Professor of Management in the Carroll School of Management at Boston College (BC). She was a co-founder of the Leadership for the Change Program: Sustainability, Responsibility, Community at Boston College and the Initiative for Responsible Investing (formerly at the BC Center for Corporate Citizenship, now at the Hauser Center, Harvard Kennedy School). Widely published, Dr. Waddock’s research interests are in the area of macro-system change, corporate responsibility, management education and multi-sector collaboration. In 2011, she received the Best Book Award for The difference makers from the Social Issues in Management Division of the Academy of Management. In 2005, she was awarded the Faculty Pioneer Award for External Impact by the Aspen Institute and World Resources Institute. 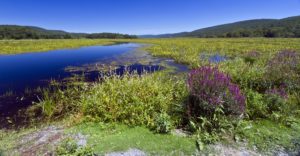 Environmental change comes from leaders who promote others’ welfare, motivate change, and can act in different leadership roles.