Researchers find auditors are more lenient when auditing customers who buy their other services.

The 2014 Research Impact on Practice Award (RIPA) was announced August 4, 2014 at the Academy of Management’s annual meeting in Philadelphia. The award is given by NBS and the Organizations and the Natural Environment (ONE) Division of the Academy of Management. Professors Lamar Pierce and Michael Toffel won the 2014 RIPA for their rigorous study on the key qualities of trustworthy auditors.

Pierce and Toffel’s research article, “The Role of Organizational Scope and Governance in Strengthening Private Monitoring,” studied the conditions under which auditors provide more or less stringent audits. As many auditing firms “cross sell” additional services such as consulting, Pierce and Toffel found that auditors are more lenient when auditing customers who buy their other services, perhaps because the auditing company tries to keep both of these revenue streams flowing.

The researchers’ recommendation: for more stringent auditing, choose a firm solely focused on auditing. Compared to independent firms, franchises and subsidiaries also tend to be more trustworthy auditors because they are subject to monitoring by corporate headquarters, and so have stronger incentives to audit stringently. Pierce (Washington University in St. Louis) and Toffel (Harvard Business School) published their findings in the journal Organization Science.

Pierce and Toffel’s deep insights into the auditing industry demonstrates the valuable insight academic research can offer business practice, underscoring the core objectives of the Research Impact on Practice Award. “Researchers and managers often care about the same issues, but the two communities do not often share what they know,” says Tima Bansal, executive director of NBS. “This award is about connecting those two communities and sharing their knowledge.” Frances Bowen, ONE Chair, adds: “Sustainability researchers are eager to have their insights put to work.”

Auditing, certification, and other private monitoring are widespread. Governments often require monitoring of compliance with environmental, labor, consumer, and financial reporting rules, and firms seek to understand quality and workplace conditions in their supply chains. “If the monitoring isn’t credible, this oversight is valueless,” explains Pierce. In all these situations, says Toffel, “our findings should help firms make better choices about which auditors are more likely to provide a more accurate portrayal of the facts on the ground.”

“Sometimes I just find myself shaking my head after talking to participants in recent [climate conferences],” commented Wittneben in an Academy of Management media release. “They’ll come back from the meetings simply brimming with enthusiasm about the networking they’ve done, the contacts they’ve made, the new ideas about their research they had or the new angles to lobbying they thought of. But ask what progress was made in terms of global policy initiatives, and all you get is a shrug.”

These researchers studied effective renewable energy policies. Clean energy firms balance their efforts between developing innovative technologies (“exploration”) and bringing them to market (“exploitation”). The researchers studied how government policies intended to support clean energy affect that balance. From their study, they derive recommendations for how to design energy policies to support both goals.

“In recent years, governments around the world have spent billions of dollars to support clean energy technologies,” says Hoppmann. “Given the amount of money spent, we were surprised to learn that neither policy makers nor corporations had thought much about how the policies put in place affected firm-level innovation and technological diversity. By studying several firms in detail, this project sought to better understand how firms perceive and respond to policy incentives. The results help design public policies in a way that explicitly considers their effect on technological innovation and have already been considered in political debates in Germany, Switzerland and the US.”

Find out more about the Research Impact on Practice Award and previous winners.

PrevPreviousCSR Among SMEs: What Researchers Can Agree On and What’s Missing from the Debate
NextPractice Makes Perfect: How Business Influences ResearchNext 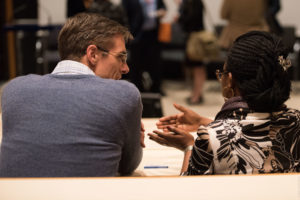 How Sustainability Centres Can Support Research that Impacts Practice

Advice on doing research that impacts practice from business school sustainability centre leaders around the world.