To Behave Ethically in Business, Reflect

When Rupal Patel launched technology firm VocaliD, she was founding a new field. As someone committed to ethical business, she had to deal with traditional ethical challenges as well as the uncertainty of a new technology.

Ethical issues are baked into business. Maybe it’s how employees are treated, or what kinds of products are sold. Many decisions have a moral element, where choices may be seen as wrong by some in society.

Their core message may be that ethical action is an ongoing process, that requires reflection, adaptation, and practice. It’s also about building relationships and understanding others’ perspectives, to strengthen what Rupal Patel calls “the empathy muscle.”

Our expert panelists are:

Edited highlights from their conversation are below.

Case study: How VocaliD protected its technology from abuse

Rupal Patel: Our company started with a focus on creating unique synthetic voices for people who couldn’t speak. Individuals who had to use a device to talk would have to use a voice that was pretty generic sounding. We created a unique-sounding voice for them by crowd-sourcing the voices of everyday people.

A leading bank came to us back in 2018, and said, “You’re making these voices really accessible for people who can’t speak, but we’ve implemented voice authentication on all of our voice channels so people can call into their bank just with their voice. Their voice is their password.

“Could that voice be counterfeited? How easy is it really to make a unique synthetic voice? Could 5 to 10 minutes of someone’s audio on the Internet be used to generate a voice?”[1]

We said to the bank, “Listen, digital voices are not going to be that convincing.,” But we thought, “I wonder if this is possible.” So we started doing penetration tests to see how much data someone would need to generate a convincing voice. Even back then, with two-generations-old technology, we were able to get through the automated voice authentication system.

That was the initial realization for us. That gap between synthetic and human voices is just going to continue to get smaller and smaller. Today I can tell you that, when we create synthetic voices and we intermingle the human voice recording with an audio clip that is synthetic, often it’s hard to tell which one is which. And we knew that this was coming.

So we at VocaliD started building up technologies that would then embed signals within our voices in order to protect those voices, by identifying them as synthetic. It’s a bit of a moving target, though, because you have to continuously modify the technology in order for it to avoid the misuse.

These are some of the practical issues when you’re talking about new technologies and the potential for them to be abused. That was a specific case in our industry, but we’ve seen this in social media too, with visual deep fakes.

Some of this is predictable. So how do we avoid that? I think there are things that you can do to protect the technology from the misuse proactively

Rupal: We need to constantly reflect on what we’re doing and not just think that one right way is always the right way. For example, I imagine that companies maybe 10, 15 years ago weren’t really thinking about environmental sustainability. As knowledge builds, the consequences of your actions are going to be changing over time.

Reflection is really important because I think you need some distance away to measure and think about the various different consequences of the action that you’re going to be taking.

Laura LeDuc: I frequently tell my students in my classes that there’s not one right answer in management. There might be lots of good answers and some really bad answers. As a manager, your role is to assess the situation, gather as much information as you can with which to make the best decision that you can, and hope for the best at that point.

Sometimes you realize later on that you’ve made a mistake. You didn’t foresee the outcomes that came out. Then you adjust.

Rupal: Owning that error is also part of ethical behavior. You have to be able to say, “That mistake is one that we shouldn’t have made in the first place. If we had better skills or had foreseen this, this wouldn’t have happened.”

You’re not going to be right all the time, but you want to aim towards rightness.

Leigh Hafrey: Imagination seems to me fundamental here, and curiosity. Ethics is not just “You shouldn’t have done that. You did it the wrong way.” Instead, ethics involves active exploration, self-realization, and an understanding of the expectations and hopes and constraints under which we all operate.

Empathy — understanding others’ perspectives — is critical

Leigh: Ethics assumes networks of relationships. There is no one-person ethics that develops in the absence of any other human contact. This idea of empathy underpins everything when we talk about ethics.

Rupal: The hardest thing is forming that empathy muscle to figure out how to act appropriately.

Laura: I love this concept of the empathy muscle. I think it’s great for pointing out this idea that this is a skill, that the more we practice it the better we get at it.

Laura: There’s multiple prongs to creating ethical organizations. I think the more ways you attack the issue the more likely you are to have good outcomes.

One thing to think about is cultures and norms. You communicate both through words and through action, and they have to be consistent.

Another way to think about this is through training of your employees. Here’s what we know from research about effective training about what works:

Rewards matter too. So often in our organizations what we reward are the things that benefit the bottom line, and that encourages behavior that’s focused on financial benefit for the organization.

You want to also hire good people. People have different personality traits and personal values that influence how they behave.

Rupal: In hiring, I think that sometimes using scenarios of cases during the interview is a good way to find if there’s a fit between your organization and the values of the candidate that you’re interviewing.

Cutting-edge fields can still learn from other industries’ experience

Rupal: In a new field, you don’t know exactly how your technology or your innovation is going to impact the world. But you’ve probably seen other, similar kinds of technologies and what their impact has been.

Then you can think about how do you protect that media, how do you raise awareness, what’s the role of education. I think the onus of acting ethically as an organization includes educating the public on how to use these new technologies or innovations as well.

And then the other piece is working with other like-minded companies to hold each other accountable.

Laura: Ethical action does seem to be good for business. For example, research shows that organizations that engage in CSR efforts tend to have stronger financial performance.

Leigh: Industry associations, like Rupal’s Aithos Coalition, can help you not be the one to make the sacrifice of being the first mover and exposing yourself in a way that your competitors can then take advantage of.

Rupal: You have to have conversations about the ethical risks while, at the same time, making sure that people aren’t afraid of the technology that you’re creating? At times, people say, “[Because of the ethical issues], I’m not going to use that.” You can’t afford that either. It’s a fine line definitely.

People may not agree on the definition of ethical behavior

Leigh: I would add to that there are lots of different ways to recognize the importance of society to the outcomes of business and business operations. The tensions around business ethics come down in part to those differing ideas about what qualifies as ethical behavior.

I hear, as I listen to, Laura, a commitment to stakeholder value. That’s a phrase that is commonly opposed to a focus on shareholders and specifically maximizing shareholder value. But even if you go back and look at one of the source texts for this debate, which is Milton Friedman’s piece from 1970, The Social Responsibility of Businesses to Increase its Profits —I don’t think Friedman was saying value not values. The question of how to construct social interaction between business and the rest of society is an open question I think still today, 50 years later.

Laura: When we’re trying to teach students ethics, we don’t try to tell them what the right answer is. We try to give them a critical thinking process that will help them come up with an answer that they feel good about, that hopefully takes into account the values of society.

Rupal: Another big part of ethics is thinking about not just today’s value but also thinking about the future generation’s value of the work that you’re doing.

Rupal: I think we’re starting to hear much more about ethics these days with B Corps and organizations that, from the outset, their mission is both to create social good and to have shareholder value. But I don’t think it’s just B Corps that are responsible for doing that. All organizations should be trying to make the world a better place than if they didn’t exist.

It’s not about winners and losers. It’s about lifting up everyone. Let’s not think about this small pie that we have to divide in slices. Let’s imagine that, if we do the right thing, the pie actually grows, that everyone gets better. I think we have to convince ourselves that that is the way of the future.

Leigh: We need to ask whether we, as individuals and our organizations, operate the way they do because that’s our nature or whether we have systemic assumptions that could be changed. Is there something about capitalism as we practice it, particularly in the United States, that leads to unethical behaviour, and should we be thinking hard about policy initiatives and self-regulation that would change that?

Leigh and Laura recommend: Giving Voice to Values by Mary Gentile. A series of cases and exercises on how to express your values in the workplace.

Leigh recommends: Humankind by Rutger Bregman. The book argues that human beings are kind by nature.

[1] VocalID only creates AI voices when someone has approved the use of their voice and data, but a number of open source tools are available to build a voice clone. 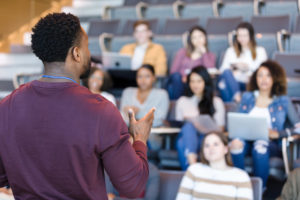 Whether you teach accounting, marketing, or finance, sustainability is key. Browse NBS’s resources for your class and inspire your teaching.

Nike Supply Chain Issues – How They Turned a Crisis into Opportunity

Nike’s response to a supply chain crisis repositioned it as a sustainability leader, and raised the bar for an entire industry.