All these terms refer to something very real: Changes in the Earth’s temperature and weather patterns because of human carbon emissions.

But global warming isn’t just an environmental issue. It’s actually a ‘threat multiplier.’ That’s a fancy way to say that it will make worse the other challenges we are already trying to solve.

Here are a couple of examples.

More frequent, longer-lasting droughts will mean farmers can’t grow crops. That will lead to more poverty in the low-income countries that depend on agricultural exports – and much more expensive bread elsewhere in the world.

More intense storms or droughts will mean millions of people need to move – either temporarily or permanently. The United Nations estimates that 20 million people each year are already forced from their homes because of climate change.

Storms and droughts also affect the economy. For example, in 2019-2020, bushfires in Australia linked to climate change cost insurance companies USD 1.3 billion. And if an insurance company is paying out more money for property damage, shareholders also take a hit.

See what I mean? It’s really not an environmental issue. It’s an “everything else we care about” issue.

OK. Enough of the doom and gloom. There is also hope.

People and organizations are already beginning to shift. There’s a lot we can do to stop the climate from warming and adapt to the changes already upon us.

This article summarizes scientific knowledge that will help you understand:

What is the cause of climate change?

Leading global scientists have found that Earth is 1.2 degrees Celsius, or 2.2 degrees Fahrenheit, warmer now than it was in 1850, around the start of the Industrial Revolution.

During this time, people have been burning more “fossil fuels” — oil, gas and coal — for heat and electricity. Burning fossil fuels releases gases like carbon dioxide (CO2) and methane into the atmosphere.

Kind of like a greenhouse retains the heat inside of it, these gases warm the air around the earth. (That’s why they are commonly called “greenhouse gases.”)

Here’s how it works: When the Sun’s light hits the Earth’s surface, some is absorbed and re-emitted as infrared energy, which we feel as heat. Without greenhouse gases, that heat would just escape back out to space. But instead, CO2 and other gases absorb the infrared energy and send some of it back toward the Earth.

The more of these gases humans put into the atmosphere, the more of the Sun’s energy gets sent back to Earth and warms our planet.

In addition to burning fossil fuels, people affect the climate in other ways. For example, how we use land can either release CO2 into the atmosphere or take it out. In particular, turning land from forest into agriculture or grazing, draining peatlands, or converting farms to suburbs all result in more CO2. 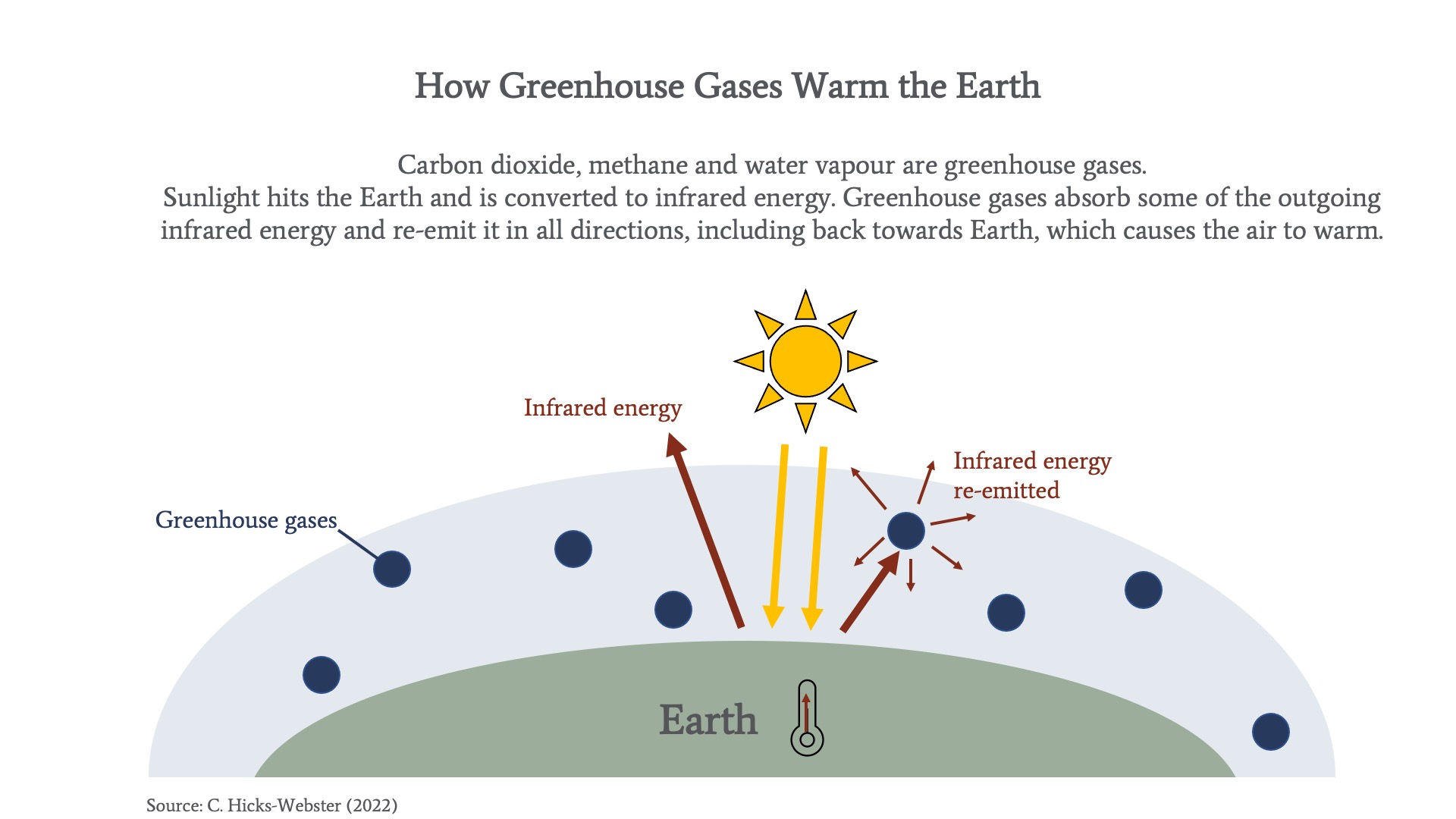 Global warming is not just a theory – it’s scientifically proven.

In 2021, 234 experts from 64 countries worked with the International Panel on Climate Change to publish a detailed summary of climate change science.

The figure below is from their report. The black line shows actual data on global temperatures since 1850. The data exactly mirror the temperatures we would expect based on CO2 modelling (the brown line). (Work generally focuses on CO2 as the most common greenhouse gas.) 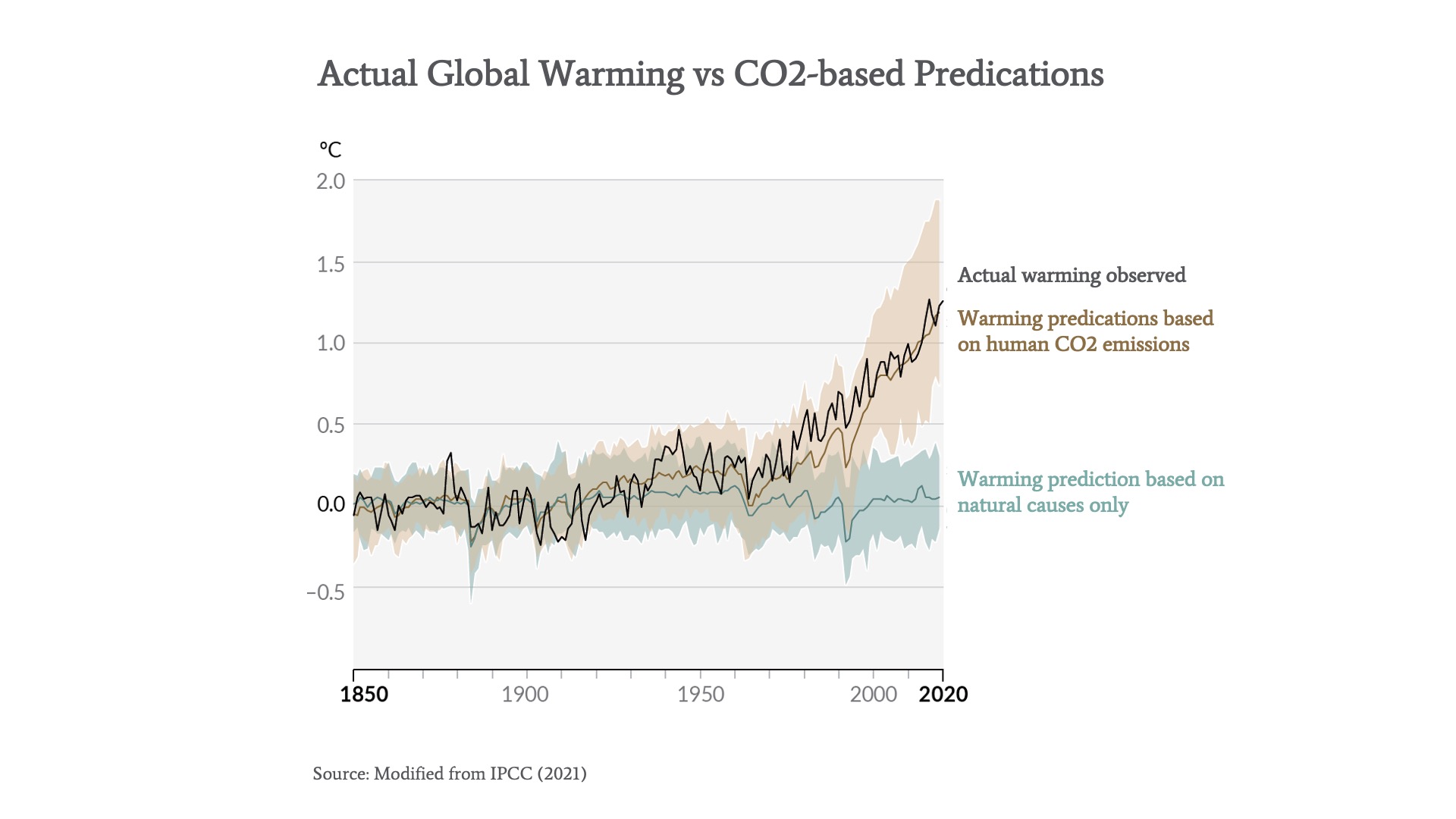 How much warmer will the climate get? We know it will keep warming, but the exact amount depends on the actions taken by governments, citizens, and organizations such as businesses.

Why does climate change matter?

You might think warmer weather would be a good thing, especially for people in colder areas.

But global warming is complicated. Warmer weather causes a host of scary spin-off effects. Some of those might be obvious – for example, warmer weather is clearly linked to droughts and heat waves.

But because the global weather system is so complex, heating it up also causes several impacts you might not predict – sometimes called “global weirding.”

Here’s a list of the effects the world is already seeing because of global warming. Each will likely increase without swift drops in global CO2 emissions.

Changes will intensify and become irreversible

Globally, these effects will intensify. And the changes will not be ‘slow and steady.’ “Tipping points” exist in nature. That means after a certain amount of warming, some changes can’t be reversed and may actually start to speed up.

For example, we may have already warmed the climate enough to destabilize parts of the Antarctic ice sheet. Even if we stopped emitting CO2 tomorrow, the ice would continue to melt, causing a 10 m rise in sea levels.

How climate change relates to business

Since the Industrial Revolution, the business sector has helped drive climate change. And along with everyone else, businesses will be impacted by the changes in climate.

Businesses influence climate because carbon emissions are baked into most business activities. Businesses release CO2 when they:

In turn, here are some ways that changing weather patterns are impacting business.

Taiwan is the world’s largest manufacturer of semiconductors. Taiwanese companies send semiconductors to Malaysia to be packaged before they go to U.S. auto makers. But in December 2021, a typhoon linked to climate change caused severe flooding in Malaysia, meaning microchips could not be packaged. This packaging breakdown in the semiconductor supply chain forced some U.S. auto makers to pause their operations.

Tracy Schohr is a 6th generation cattle farmer in California, US. Her cattle usually graze on wild grass and draw on natural water reservoirs for more than half the year – lowering her feed costs. In 2021, a drought linked to climate change meant that less grass and water were naturally available; Schohr had to buy food for the cattle for an extra 2.5 months.

Ski companies depend on long winters to keep sales high. As a warming climate leads to shorter winters, ski resorts must shorten their season. This results in less revenue for ski resorts.

The Rhine River is one of Europe’s most important shipping channels. In 2018, drought triggered a record low water level, stopping all shipping. Steel companies that depend on the Rhine to ship their product, including Solvay, BASF, Ineos and Arcelor Mittal, were unable to ship the product required to fulfill their contracts with customers. In February 2021, intense rainfall then caused the Rhine to overflow its banks, which again ground shipping to a halt for several days.

As climate change intensifies, governments are beginning to regulate carbon more assertively. This has important implications for business. For example, it has historically been optional for companies to publicly report their carbon emissions. As of 2022, the U.S. Securities and Exchange Commission intends to require all publicly traded companies to report their emissions and climate-related risks. Companies who were not already reporting will be scrambling to grow their reporting abilities. 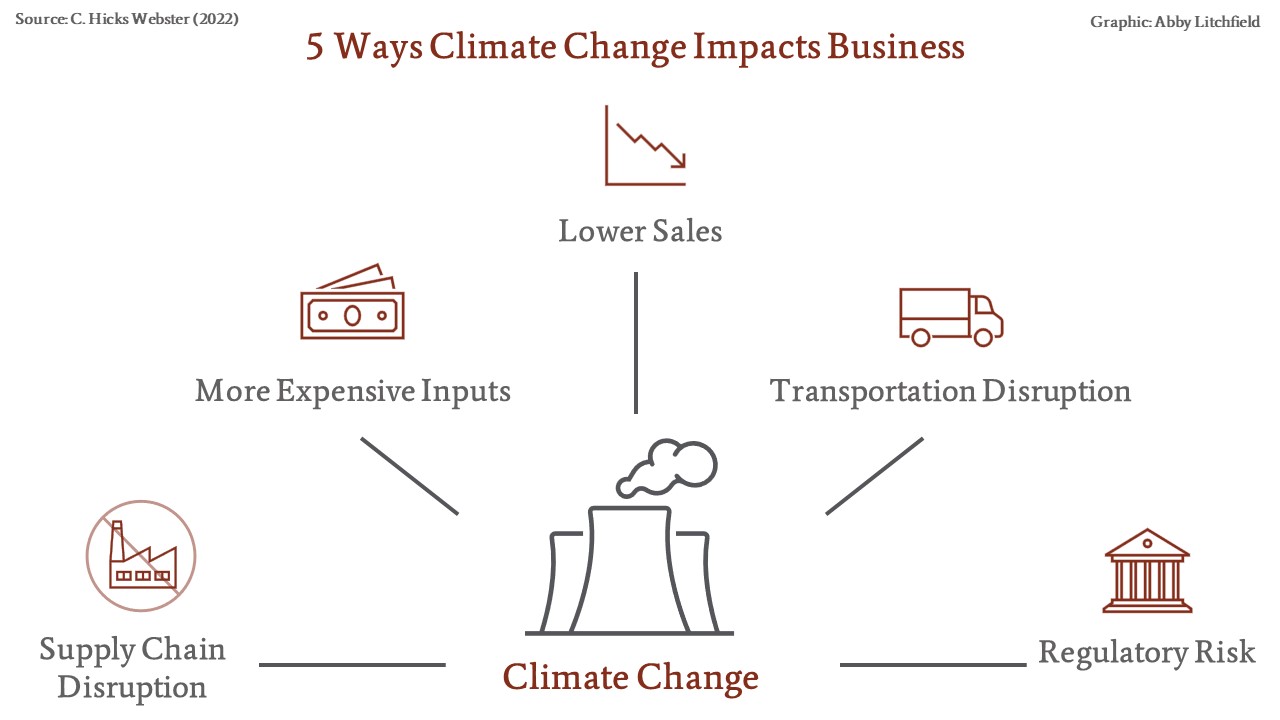 What can we do about climate change?

Harvard professor John Holdren said, “We basically have three choices: mitigation, adaptation, and suffering. We’re going to do some of each. The question is what the mix is going to be. The more mitigation we do, the less adaptation will be required, and the less suffering there will be.”

Here’s what he means:

Mitigation is about stopping the climate from warming. Essentially, it’s anything we can do to (a) stop CO2 from going into the air or (b) suck CO2 out of the air.

Adaptation is about understanding the impact of climate change on your business, now and in the future. Then, making concrete plans to minimize risk – and even capitalize on opportunities!

NBS is developing “Basics” articles on each of these topics, but here’s a quick overview.

In December 2015, world leaders signed the Paris Agreement, the first legally binding pledge to reduce carbon emissions. Today, 192 countries and the European Union are members of the Paris Agreement. Each member pledges to limit global warming to no more than 2 degrees Celsius – but ideally to 1.5 degrees.

Here’s how your business can help the world reach that goal:

How to adapt to climate change

We know that global warming is already causing droughts, floods and intense storms that impact business operations. To avoid unexpected business costs and interruptions, understand how climate change is impacting your areas of operation and address your vulnerabilities.

You can do that by:

We’re in a new era, and it will be hotter. It’s time to shape our future – and make it a better one.

“The Basics” provides essential knowledge about core business sustainability topics. All articles are written or reviewed by an expert in the field. The Network for Business Sustainability builds these articles for business leaders thinking ahead.

Review of this article provided by:

Dr. Kelsey Dyez, a geochemistry and climate change educator and researcher at the University of Michigan. His work seeks to understand how our climate – including the oceans – are changing and how they will likely change in the future. He’s particularly interested in projects that provide decision makers with the tools, background, and scientific expertise to make sound choices.

How Managers Can Cut Energy Use, Divert Waste, and Improve Company Decision-Making 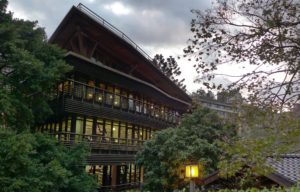 The business case for green buildings is compelling. But design fees and long construction times are an up-front hurdle.